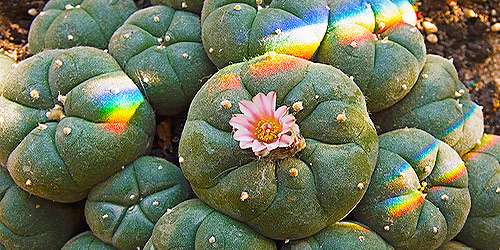 Mescaline and about 20 other biologically active alkaloids account for the psychological and physical effects of the Peyote cactus buds (Lophora williamsii) referred to as “buttons.” The fresh or dried buds of the cactus are eaten as is, or steeped into a tea. The cacti are found in the Rio Grande area of Texas and Mexico. It is estimated that Peyote has been used as an hallucinogenic agent for at least 3,000 years, and is an important spiritual component of some southwest United States native religions. Mescaline has chemical similarities to epinephrine, although other active alkaloids are also present in Peyote.

Disorientation, brilliant colourful visual hallucinations, auditory distortions, and loss of sense of reality are common. Trips are about 12 hours.

Buttons are eaten raw or dried.

Strong hallucinogen. May be legal if you are a member of some Native American religions.