What is scattered all across our earth, yet hard to find?  What kills over 10,000 people every year when they find it by accident? 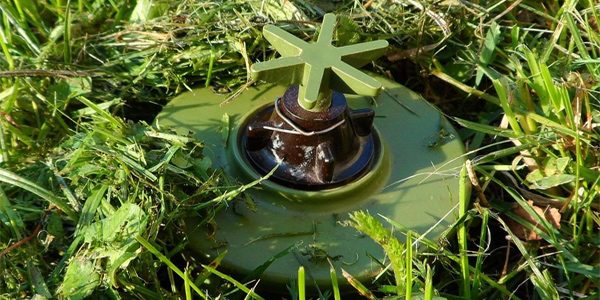 Landmines come in various deadly packages. Also known as antipersonnel mines (AP), they are generally made to explode if stepped on. Larger anti-tank mines are designed to explode when driven over with vehicles. Further variations include booby traps, which can explode when a door is opened or an object (such as a toy) is picked up. Mines are often used to protect military sites from enemies. However, mines are also used to demoralize populations by placing them near necessities like drinking water or agricultural land.

Landmines kill 70% of their victims, about 10,000 deaths every year. Of the survivors, half are severely injured with many needing limbs amputated. Beyond the physical damage there are many other consequences of landmines. With a region or village perimeter heavily laden with landmines, access to the area by much-needed medical teams or aid workers is affected. In addition, by mining farms or water sources, the risks of malnutrition and disease often increase greatly. Landmines not only kill or maim victims; they also affect the nearby communities. 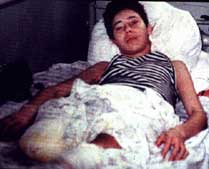 One of thousands of young victims

Mines are found throughout the world. The continent most laden with landmines is Africa with 26 countries facing mines and little progress in dealing with the problem. In the Americas, landmines are mostly found around remote border areas in countries such as Chile, Ecuador and Peru. Some Eastern European, Central Asian and Asian-Pacific countries also have landmine situations. Many afflicted countries such as Turkey, Albania, India, North and South Korea have not made in-depth assessments of the problem. Many of the poorer mine-infested countries cannot afford de-mining programs.

Canada has joined 136 other countries by signing the Mine Ban Treaty, and is part of the 86 countries that have ratified it. Canada had destroyed all our 90,000 antipersonnel mines by 1997, part of the 9.6 million that were destroyed by countries around the world. Some countries indicate financial and technical problems in destroying antipersonnel mines. Others, like the United States, refuse to limit their ability to maim and kill, choosing not to join the ban on landmines. There is still work to be done to destroy the remaining 250 million mines left in at least 104 countries around the world. 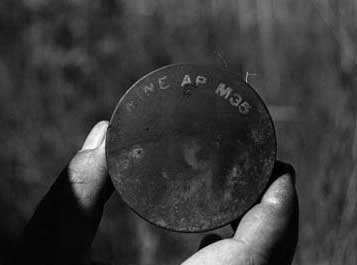 Organizations such as the UN Mine Action Service, Halo UK and Mines Action Canada play major roles in gathering accurate data about landmines and helping to detect and remove them around the world – while promoting global awareness about the issue. Support for these groups is important to help put a stop to the senseless maiming and death of innocent people caused by landmines.

Mary Wareham, coordinator of the U.S Campaign to ban mines writes, “Land mines are killing people. The issue cannot afford to wait . . .” Unfortunately, this is a challenging issue. While the price for antipersonnel mines is $3 – $10, it can cost $1000 to remove one. Besides, it would take 100 years to clean Cambodia alone, not to mention $33 billion and 1,100 years to rid the world of mines. Although over 25,000 are killed or maimed each year, we have begun to remove mines worldwide. We may yet eliminate the fear of mines for generations to come.

Countries with the most landmines 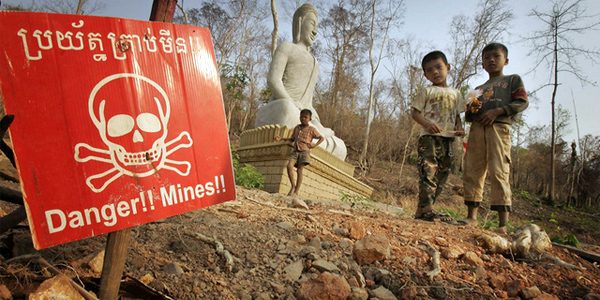 For more information on landmines visit the International Campaign to Ban Landmines site at http://www.icbl.org/