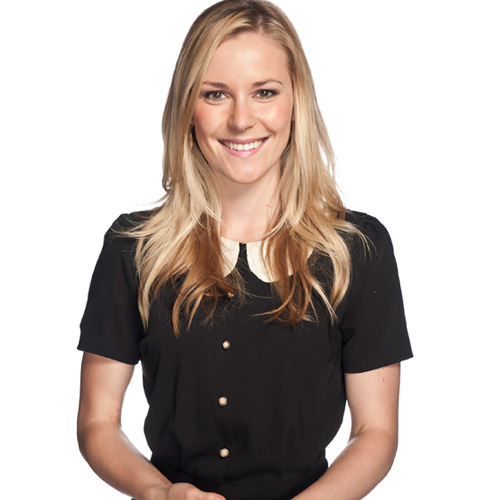 Renee Paquette is the host of The Score’s wrestling show Aftermath and has succeeded in a very “dude-heavy” world. The studios for The Score television network have all the makings of a boys’ club. Renee’s desk is across the room from an arcade basketball hoop and is covered with wrestling action figures.

“I played sports really competitively as a kid,” says Renee. “So, it seemed like it would make sense that I would be comfortable coming into a sports atmosphere.”

In wrestling, she covers a sport that has athletes hitting each other with steel chairs, so a bit of toughness serves her well. Fortunately, she played rough-and-tumble sports like ringette and hockey growing up. She has had two concussions and once broke her collar bone when she says, “A huge girl fell on me.”

If you had asked her a few years ago if she would want to host a wrestling show, Renee claims it wouldn’t have been on her radar. But now that she does, she’s embraced the role. “It’s probably the best fit. It’s not being analytical about a sport or breaking it down… It’s entertainment-based and we get to have fun with it.”

Renee grew up in Ajax, Ontario and moved to Los Angeles right after high school to get into either acting or hosting. Eventually she moved back to Canada and hired an agent. “I started to realize that auditions suck, so that’s when I switched into hosting.”

She didn’t have any formal training per se, so her plan was simply to get in front of a camera as much as she could. She did funny segments on Canada’s BiteTV and her demo tape impressed producers at The Score.

As a funny/sporty girl, Renee is a perfect fit. The network has established itself in Canadian sports television as the edgy network, with anchors that spend as much time joking around as they do analysing the game. “It’s comedy blended with sports. You get to have a bit more fun with it. It’s not traditional sports broadcasting,” says Renee. She adds that part of the fun is being able to laugh about on-air bloopers, instead of being embarrassed by them. “I love flawed TV. I’d rather have [mess]-ups and maybe silly things that shouldn’t have been in there. I like to keep it as natural and normal as possible.”

Surprisingly, Renee claims she hasn’t encountered any major gender barriers while working in sports broadcasting. She says women definitely have a place on sports TV and shouldn’t be intimidated when starting a career. “I feel like it’s a bit of a crutch for girls to come in and think, ‘Oh, I have to be the woman in this male world.’ I just don’t think that it’s like that. I actually never really felt the pressures of that.”

Renee is now helping to open the door for other people to enter sports broadcasting. For the third year in a row, The Score will air a reality-based show called Drafted, as people compete for an anchor gig on the network. Renee sits on the panel of judges that gets to critique the contestants, American Idol-style.

When asked if she has any advice for those who want a career in broadcasting, she says that people who succeed don’t wait around for a big break, they make it happen. “Tackle it head-on… [Success] is being able to take your career in your own hands.”