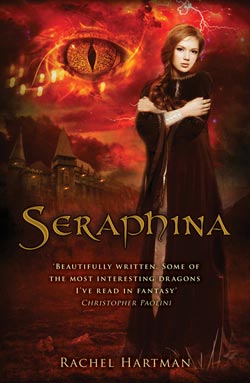 Despite forty years of peace between humans and dragons (who can take human form), tensions run high in the kingdom of Goredd. The hatred between the species intensifies when a member of the royal family is murdered days before “Treaty Eve” and all signs point to a dragon. With the renewal of the treaty in jeopardy, our musically gifted protagonist, Seraphina Dombegh, must team up with Prince Lucian Kiggs to find out who really killed Prince Rufus. But Seraphina has her own deadly secret: she’s half human, half dragon—an abomination in the world of Goredd, and people are starting to catch on.

At 512 pages, Seraphina is an intimidating read, but with well-developed characters, breathtakingly beautiful prose, and an incredibly detailed world, it’s totally worth it! To be honest, the book started off a little slow but we promise if you punch through the first few chapters you’ll fall in love with this enchanting fantasy novel.

Romance: The romance in Seraphina is refreshingly realistic and super sweet.

Suspense: Who’s responsible for the royal murder? Will Seraphina’s secret be discovered? These questions will keep you on the edge of your seat!

Relatability: Seraphina’s self-hatred and struggle for acceptance is sure to strike a chord with Faze readers.

PLUS: Faze got the opportunity to chat with Seraphina author, Rachel Hartman, about the book and its equally awesome sequel, Shadow Scale. Here’s what she had to say.

If you could describe your duology in one word, what would it be?

Rachel: That’s super hard! Have you seen how thick these books are? Okay, I would say the first one is about acceptance and the second one is about emergence.

The names in your books are very unusual like Orma, Seraphina and Princess Glisselda. How did you come up with these names? Do they mean anything?

Rachel: Some of them mean things and some of them don’t. Seraphina, actually, was originally called Theodosia which is a name I like. But right when my agent was pitching it to publishers, there was another book that came out called “Theodosia and the Serpents of Chaos.” And he was like, “Oh, that’s two Theodosia’s at the same time, maybe we should find a different name.” So we argued a lot and he suggested Seraphina and my knee jerk reaction was that I hated it so much. But I thought about it and I looked it up and it turns out it comes from the same root as “seraphim” which means “fiery one” so I was like “oh—right, okay, that’s unfortunately very perfect.” It was hard remembering for a while, when you change a character’s name, that’s someone you’ve lived with for so many years so it was hard to remember. Orma was named after this guy I worked with once named Norman who I was convinced was a dragon (laughs) but you can’t have “Norman the Dragon.” It sounds kind of silly. So I just took the consonants off the ends. Lucian Kiggs is named after Lucian of Samosata, my favourite ancient Greek satirist. I mean, they all come from somewhere—usually some place weird (laughs). Lars is named after the drummer from Metallica.

Rachel: No, he was inspired by the movie Metal: A Head Banger’s Journey. I don’t know if you’ve ever seen it, it’s Canadian actually. It’s a documentary about heavy metal especially through the ’80s and I was watching this and I had never really listened to much metal, I always listened to classical music. [The movie] was showing the roots of metal in things like Wagner where it was really loud and I was like “oh.” It made me think, you know, if you were in a medieval situation there are going to be people who like loud music. There are going to be people who are like “rawr” and tough. So a metal head in the Middle Ages? What is he going to be playing or doing or thinking? So then Lars has built that organ and he plays the bagpipes and so he likes it loud. So the name Lars was a tribute to the whole movie (laughs). He’s my metal head.

If you were a movie director, who would you cast as the main characters?

Rachel: Oh golly (laughs)! This is the most difficult question for me because I really, I don’t know—the main characters in particular. I would hope it would be an opportunity for new people who have never gotten to do anything before, that’s what I would say. The only character that I had any kind of actor in mind as I was writing is the leader of the dragon world, the Ardmagar Comonot. I was trying to describe him to my editor one time and I came up with the adjective “Shatneresque.” So I picture him as William Shatner, sort of hilarious.

Of all the characters, which one is your favourite?

Rachel: I think it is Seraphina’s dragon uncle, Orma. He’s everybody’s favourite and I think people are going to be a tiny bit cross with me over the way Shadow Scale ended. But it had to end that way; that was like the one thing I knew going in was the very end. Um, it was like my pole star that I was aiming for. I really have enjoyed writing him. I don’t want to say he’s based on my husband because he’s not quite. There are a lot of things that are very different but they are similar as well. My husband would rather me say that the prince is a model of him (laughs). There’s some of that too, right, it’s like I take the people I know and shake them up in a bag and everyone gets recombined in different ways.