Since the 2013 release of their first single “Wild Heart”, The Vamps have been climbing their way up the music charts. Their debut album Meet The Vamps showed great success in countries around the world, allowing them to tour with acts such as Austin Mahone, Fifth Harmony and Selena Gomez! Throughout 2014 and 2015 they headlined in venues around the world, including an arena tour in the UK where they performed at the O2 Arena twice! 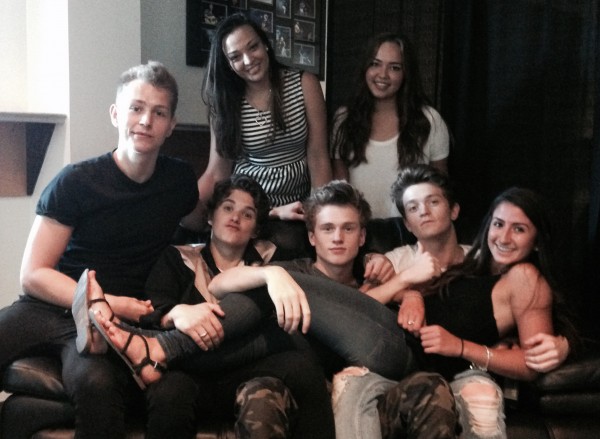 Jessica, Holly, and Daniella snapped a picture with The Vamps after their interview at Big Ticket Summer!

When talking about touring Brad told us, “Tour is very, very fun. It’s wicked. You get to see a lot of new places, meet new people, have fun, you’re with cool people, it’s all good.”

The Vamps album includes a song titled “Oh Cecelia” which features Canada’s very own, Shawn Mendes. “We went on tour with him, across America, in fact we played this very venue (Molson Canadian Amphitheatre), on Tristan’s birthday,” James shares. “So it was great to get to know him and we thought he’d be a good contribution to the song.”

It is clear that The Vamps have had an extremely successful music career so far, but this is only the beginning. Tristan told us a little bit about what we can expect from them in the future, “Our album comes out in November 27, single will come out in October, we filmed a music video, ready to release, and we can’t wait to release it.”

On September 15th The Vamps released multiple exciting announcements about what to expect for the rest of 2015 (for a breakdown on all The Vamps news check out this article). The highly anticipated single “Wake Up” will be released October 2, but has already reached charts on iTunes around the world on pre-orders alone! The Vamps new album will be a true reflection of their musical maturity and talent. November 27 can’t come soon enough!

Check out The Vamps give dating advice while playing “Yay Or Nay: The Dating Game” backstage at The Big Ticket Summer concert in Toronto:

Tune into Family Channel on September 25th at 7:30pm et/pt to see The Tide perform live while on The Big Ticket Summer concert tour.