Sunday, June 17 will mark the 22nd annual MuchMusic Video Awards, or the MMVAs. The list of nominees was announced this week during New Music Live. From Justin Bieber to Arcade Fire, this year’s nominees display the best of the best in the music industry. 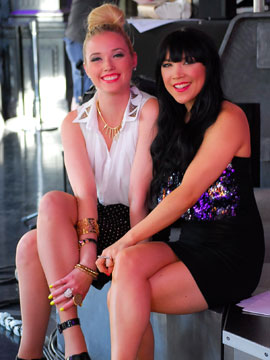 Holding the most nominations, Marianas Trench is up for 7 awards this year. We’re not sure how they will top up their grand entrances of rolling down the red carpet in giant hamster balls last year and by hot tub the year before that, but we know they’ve got something up their rock star sleeves.

“It’s going to be good. The city of Toronto has already told us we can’t do the first three ideas we had. One was to zip line in from the CN Tower or showing up in a hot air balloon only 3 feet off the ground being pulled by dwarves,” joked lead singer Josh Ramsay via webcam, as he chatted with the New Music Live VJs on Tuesday. 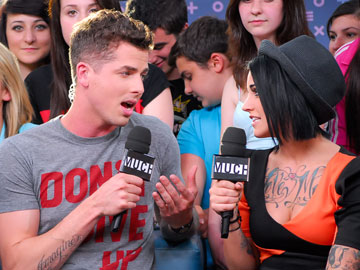 Victoria Duffield was another artist surprised by the nomination news during the night’s New Music Live show. “I’ve never been to the MMVAs so I’m super excited!” she exclaimed via webcam. Victoria is up for Pop Video of the Year for “Shut Up and Dance.”

We caught up with another nominee, Damian Abraham, lead singer of F***ed Up and host of MuchMusic’s The Wedge, who has been nominated for MuchLOUD Rock Video of the Year. 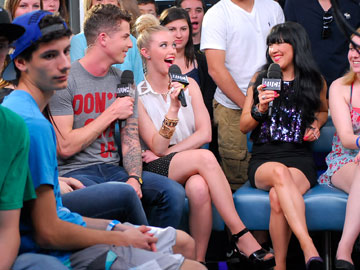 Congratulations on the nomination.  How does it feel?

Damian: Unexpected, to put it mildly. I know I work for the station and everything, but I sometimes forget that people listen to the band and people are always really supportive. For some reason I just didn’t think it would happen.

If you won, what would you do to celebrate?

Damian: Probably something very different from one another and isolated from one another. I’ll celebrate by going home and putting my son to bed. Yeah, it’s just really bizarre. It’s a world that I’m really happy I get to put my foot into. I really feel like it’s nothing I ever pictured myself in. It’s great that it’s happening.

Do you have any favourite past memories of the MMVAs?

Damian: Arcade Fire playing was amazing. Alexisonfire playing on it was pretty awesome too. The Beastie Boys performance was phenomenal. There’s probably older performances I’m forgetting. Much Music was my go-to place when I was a kid. I watched that award show every year, until I started being able to get to it and then I started sneaking in. 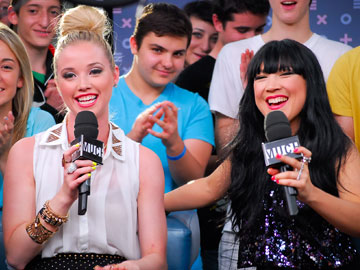 Any artists or bands you’re looking forward to seeing this year?

Damian: Well they’ve only announced the two performers. There are a lot of people I would love to see. That’s the thing, last year I got to see Lady Gaga perform. I got to see Justin Bieber kind of come out. He was like two feet away from me, granted he moved very quickly, but I got to smell him briefly and he smelled like sin and sadness. No, I’m just kidding, he smelled great.

Any plans for a red carper arrival?

Damian: I was thinking I’ll bring back the ghosts of VJs past—like come out with Steve Anthony and Rick the Temp. It would be fantastic. I shouldn’t have given that out though; now Hedley’s going to steal it and follow through with it. 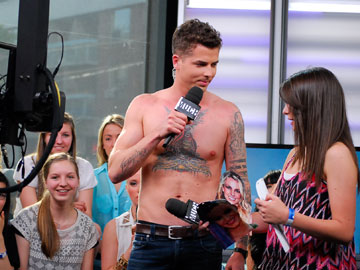 by Kelly Gabel and Nikelle Marier