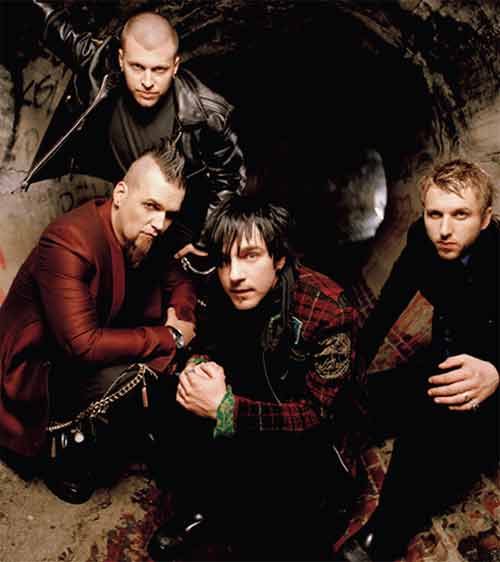 Since 2003, Norwood, Ontario’s Three Days Grace have sold nearly two million copies of their self-titled debut album in North America alone, have seen the world, and have readied their latest full-length effort, One X, for release this June.

Originally formed in 1997, it has taken Three Days Grace a lot of time and hard work to get to this point. Composed of Adam Gontier (vocals, guitar), Brad Walst (bass, vocals), Neil Sanderson (drums, vocals), and Barry Stock (guitar), the band admits to having to re-humanize itself prior to preparing the ever-important sophomore recording. “We had to re-learn how to live a normal life—because being on the road really isn’t reality,” explains Sanderson. “The one thing we did want to do was take our time with this record. We didn’t want to have any time constraints around us that would screw with our creativity.” “We basically took two or three months, and kind of went into isolation,” adds Walst. “All the outside pressures, we just left them behind and went up north.”

On One X, TDG have continued their hard-rocking ways with tracks that—while decidedly darker at points—do offer up inspiration and represent a band that is looking to please no one but themselves, and their fans. “We’ve truly made the record that we wanted to make,” says Sanderson. “We’ve really challenged ourselves on this record, so it’s going to be fun to really see the reaction from the fans when we deliver this stuff live—that’s what we’re most looking forward to.”