Popcorn. It’s everyone’s go-to food at the theatres, and you might be surprised to learn that it’s actually a healthy alternative to most snacks we love. If you’re looking for fabulous specialty popcorn in the heart of Toronto that offers more than 100 flavours, we suggest you check out the Toronto Popcorn Company in Kensington Market.

Moving to Canada in 2011, Joseph Villegas and his wife did what many other immigrants do—they started to look for jobs that matched what they did back home. “I was lucky enough to work with the government, practicing my profession, which is being an electronic engineer,” shares Joseph.  “But my wife, not to say that she got bored of taking care of the kids, but she kind of lost her purpose. She used to live a very dynamic lifestyle back home. She wanted to be a part of something.”

Knowing that Toronto is comprised of people from many walks of life, the Villegas’ wanted to create something that everyone could relate to. “She’s a pastry chef, so we were initially thinking of a bakery of some sort, but every other block has a pastry or cupcake shop. So to have something different to offer, we came up with popcorn.” 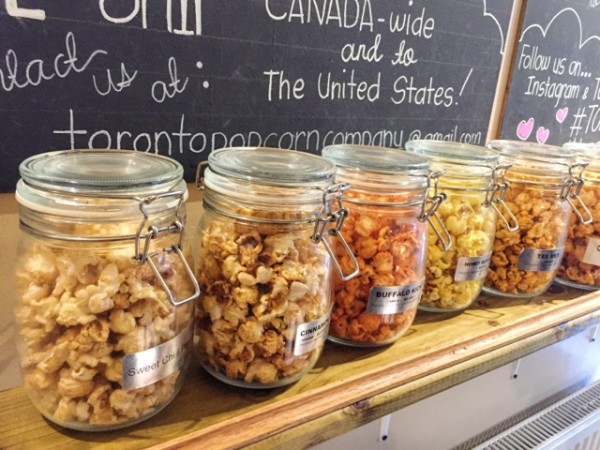 The company started small as a weekend gig in Kensington Market, but the city’s love for popcorn became more and more evident, and Joseph had to make a choice between his job and his new business. He shares: “It came to a point where I was working in a new company, and I was issued the resources, the computer and telephone, and I felt bad that I was making use of the company’s resources while filling inquiries about my other business. I decided that I’ll either have a mediocre job or mediocre business, so I needed to let go of one thing and make one thing go all the way.” Following his heart, he chose his business, and that was the start of the Toronto Popcorn Company.

The doors officially opened in June 2014 and just a few months later, the Toronto Popcorn Company was presented with a large order to fill—to be the official popcorn of the Toronto International Film Festival. “They approached us and asked us if we would be able to supply them with about 10,000 bags of popcorn within the span of four or five days for TIFF. How could I say no to that? I’m a small company, and there is a big event that is going to put your name out there. So of course we said yes—there were 24/7 operations here for that week,” Joseph says. “It was totally worth it, everyone was very tired, but we were getting tweets alongside Starbucks. It moved on pretty steady from that point onwards.” 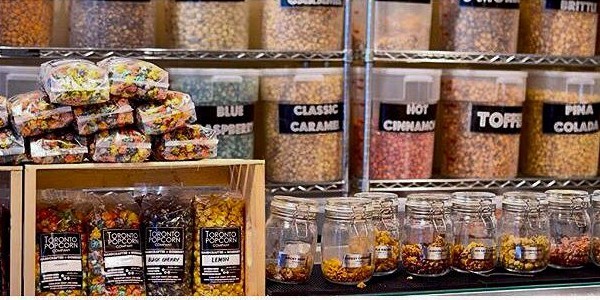 The Toronto Popcorn Company now has the cutest little shop in the heart of Kensington Market. When you visit, they have samples of every single popcorn available so we encourage you to go with an empty stomach to be able to try them all! I personally enjoyed all of the sweet popcorn flavours like Oreo Cookie, Vanilla Cake and Salted Caramel, but you could be more adventurous and mix two flavours like Joseph. “My favourite is Pizza. I like to toss it together with Cookies n’ Cream. It’s very similar to a Chicago mix which is a classic Caramel that you toss together with Cheddar.”