Fans keep rockin’ on during Toronto’s Vans Warped Tour despite the weather.

The Warped Tour takes place annually at 41 locations and consists of over 100 buses, 90 bands, 7 stages and tens of thousands of fans all over North America.

“It’s been amazing, honestly. Everyday has been better than the last,” says rapper T. Mills. “I get to play music everyday at what I feel is one of the biggest tours ever. It’s like an adult summer camp.” 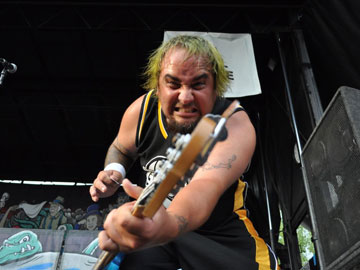 It couldn’t have been a rock concert without the mosh pits and crowd surfing, which were both highly encouraged by the bands on most stages. Pop-rock band We The Kings even offered up collectable guitar picks for those brave enough to let their bodies float along the sea of hands.

“Toronto has been great; we’ve been here many times and always love coming back,” says rhythm guitarist Eddie Reyes of the rock band Taking Back Sunday.

His band mate, drummer Mark O’Connell can’t help but agree. “The fans here in Toronto continue to come out every year to support us. They still love our music, and we still love what we do, so it’s great.”

From old school bands including Taking Back Sunday, that have been around since the ’90s, to newly formed groups who just released their debut album, The Warped Tour had at least one performer that was bound to please one’s musical taste. 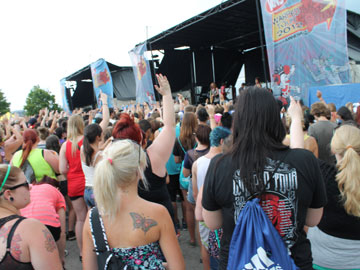 The weather, however, tried to interrupt as rain poured down, drenching everything and everyone. Lightning forced sets to be postponed and fans to be sent to nearby buildings for shelter.

Once the dark clouds disappeared and the sun came back out, muddy shoes and soaking wet clothes were ignored as fans rushed back to the stages. There was never a silent moment with bands like All Time Low, Breathe Carolina and Pierce The Veil playing on the Kia Rio Stage, to Of Mice & Men and New Found Glory playing on the Kia Soul stage.

Though the weather tried to interfere, fans still had a rockin’ good time. Be sure to check out our full photo gallery and interviews with Yellowcard and Mayday Parade.