“Living to 150 years old could be 15, maybe 20 years away,” says Bill Andrews, Ph.D, a molecular biologist and the founder of Sierra Sciences in Reno, Nevada. Dr. Andrews is a world renowned scientist dedicated to finding a cure for aging (Cure-aging-or-die-trying.com) and specializes in telomere (TEEL-o-meer) research. He states the root cause of aging is very straightforward: we age because our cells age.

To understand his research, we obviously need to get into some science.

Our body consists of trillions of chromosomes, and at the end of each chromosome there are protective tips called telomeres (like the small plastic covers at the end of shoelaces).  As our cells divide our telomeres shorten, we age as they shorten and we eventually die from old age. 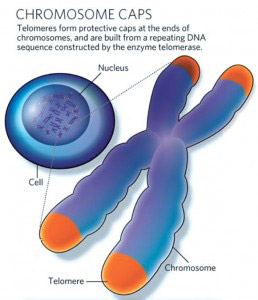 So, logically and theoretically (because this is science), if we could stop our telomeres from shortening we could live to be a thousand or forever!

Enter the telomerase (tell-OM-er-us) enzyme, which is responsible for maintaining the health and length of telomeres. Research is leading scientists to believe that activating telomerase enzymes can slow and even reverse telomere shortening, increasing a cell’s ability to replicate, and restoring and improving cellular function.

This theory has already been proven in mice. Harvard researcher Ronald A. DePinho, MD engineered the gene that makes telomerase and turned it on and off in his genetically aged mice. When turned off the mice exhibited premature aging with the shrinkage of the brain and spleen, loss of sense of smell and the loss of fertility. A month later he turned it back on, treated the mice with a drug (4-OHT) that “turned on” production of telomerase and lengthened the telomeres. This dramatically reversed symptoms of aging: their shrunken brains, spleens and testes resumed normal size, and they regained their sense of smell. The aged, infertile males once again became fertile, and fathered large litters. Sounds like these scientists are onto something. Now for all you sceptics out there, yes, we know that humans have been searching for the magic pill and the fountain of youth forever, however, whether or not we find it, let’s keep looking. So to Dr. Andrews and Dr.DePinho, keep up the good work.

Would you want to live forever? Share your thoughts with us @fazemagazine.