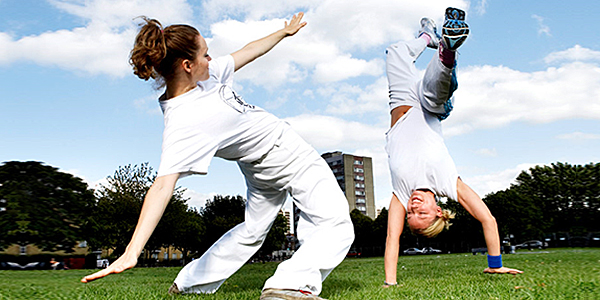 Students help each other while the instructor moves among the group, offering tips in Portuguese. They are practicing a variation of the ginga: the fundamental back and forth motion that is the base of all Capoeira. After the move is mastered, they pick up sticks and add kicks and slaps. The most accomplished hit the floor, pull headstands, or kick and spar with their partners while never ceasing to move with the music. Soon the wooden floor of the studio is reverberating with the sounds of drums, sticks, singing and pounding. The white walls and the white uniforms make the whirling bodies ethereal. At the signal they stomp to a halt. 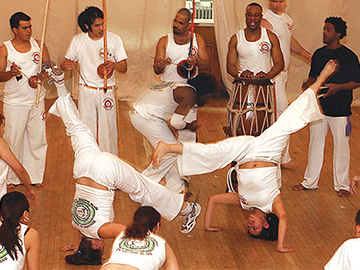 A Brazilian art form that combines martial arts, dance, music and culture, Capoeira (pr. Kah-poo-wee-rah) is exploding across Canada, offering a great workout based on hand to hand combat. Its origins date back to slave rebellions over 400 years ago. In Brazil, African slaves freed themselves and formed communities called quilombos, where they developed fighting skills under the guise of innocent dancing and singing. Fundamental moves are based on animal defences including the swatting of cats and the powerful donkey kicks. Capoeira Angola, the original form, is slow, controlled and folkloric, and has grown into Capoeira Regional, the faster and more chaotic form that flourished in 1930s Brazil. These two forms are still handed down from master to student as it was in the beginning. Masters will teach the technique, but a good teacher will let students develop their own style and inject their own personality. This flexibility has resulted in Capoeira’s popularity all over the world.

Capoeira is more than a martial art; it has been called a conversation between players. The music and motions convey stories about life, and while the songs still contain folklore, they have grown to include the bravado and bluster typical of hip hop. Players will sing together to get hyped, to psych each other out or trash talk their opponent, and the risk of injury from an insulting lyric is almost greater than that of a misplaced kick. 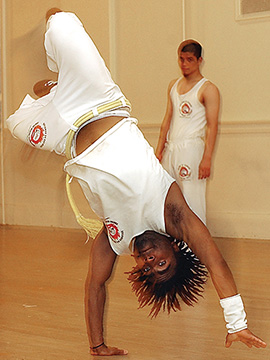