It’s style, attitude, and a great way to get from point A to point B. The skate scene continues to dominate the streets. 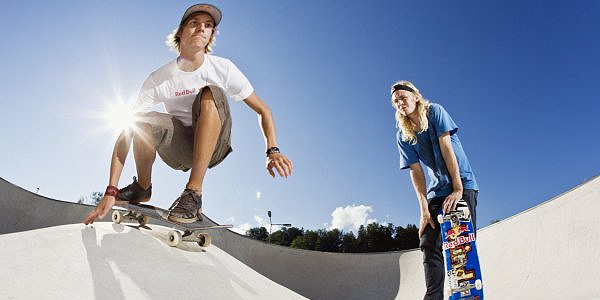 While it still holds the lingering aura of non-conformity and counter-culture, skateboarding has become a part of everyday life for millions of people (of all ages), cementing it well into the mainstream for good. 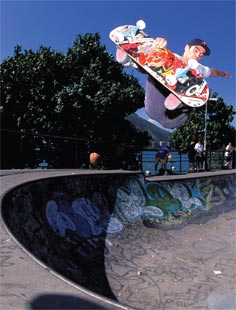 California’s Z-Boys, a skateboard team in the 70s, are often credited for popularizing skateboarding and the punk skater mindset that accompanies it. The team included skate icons Stacey Peralta, Jay Adams, and Tony Alva, along with surfer Peggy Oki, the loan female Z-Boy. Today’s half pipe riders specifically owe these trendsetters a nod because during the California drought, they discovered “vert” skating by “dropping in” to empty swimming pools and riding the walls.

The sport has evolved from a hula hoop-type novelty in the 50s to a surfing-inspired counter-culture in the 70s. Today it’s a billion-dollar industry, complete with its own stars (who hasn’t heard of Tony Hawk?) and competitions (both amateur and pro), including the sport’s ultimate battle, The X Games.

Skateboarding has inspired its own attitude and way of life that includes clothing, music and video games, and crossover sports like snowboarding. It’s a stylish sport and it’s a functional transport that you can enjoy with your friends or all on your own.

NOTE: Just to be clear, playing Tony Hawk’s Underground 2 on the Xbox, while incredibly fun, will neither get you where you need to go or burn any calories. So grab a board and get outside.

Most people start skateboarding because it looks cool and all their friends are doing it. But not only is skateboarding a fun way to get around (it’s a lot faster than walking!), it’s also great exercise—you’ve got to have serious ab control to keep yourself balanced and not much else will tone up your calves as well as a day on the pavement.

Deck: The plywood (although other materials are sometimes used) that forms the base of the skateboard.

Fakey: Being able to turn around and ride in the opposite stance on the fly.

Goofy: The term for riding with your right foot at the front of the board.

Half pipe: A large U-shaped wooden ramp that allows skaters to skate up and down each side.

Long board: Often over four feet long, these boards offer a lot of stability and comfort and are predominantly for cruising—usually downhill. 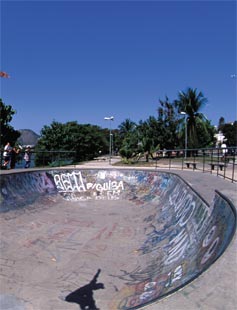 Nose: The front tip of the board.

Ollie: The first trick to learn (and the basis for most tricks to follow) that allows the rider to catch air at a standstill or in motion, with the board seemingly stuck to their feet (push down hard and quick on the tail, while lifting the nose and the whole board into the air).

Regular (stance): Riding with your left foot at the front of the board.

Short board: This is the most common skateboard size (between 7 and 8 inches wide and between 28 and 32 inches long), which allows for vert riding and the tricks that everybody wants to learn.

Street: A type of competition with an obstacle course-like terrain that includes jumps, rails, and bowls that skaters use to create a high-octane routine to wow the judges and, more importantly, the crowds.

Tail: The short end at the back of the board.

Vert: Short for vertical, this competition takes place in the half pipe, where skaters catch huge air high above the rim of each side and try to “stick the landing” coming back into the pipe.

• Skateboards will often come ready to ride. But parts can also be purchased individually to replace current components or create a custom board.• Skateboarding has its own style and there’s no shortage for inspired wear. Without a uniform, the sport is all about individuality.• Many shoe brands, such as Vans, make shoes just for skateboarding, which have better grip and support for riding.

• Skaters should always wear helmets as well as knee, elbow, and maybe even wrist pads. While it might not “feel” cool with all that gear on, the fact is skaters have smartened up and most wear protective gear nowadays. They’ve realized a funky, blood red helmet is a way better look than a funky, blood red head wound.

Tony Hawk is the most famous skateboarder in the world. He was the catalyst that took skateboarding from a hip, underground sport, to a mainstream activity. He has his own line of skateboards and clothing, and a television and film production company.

Peggy Oki, the only female member of the original Z-Boys, is now an artist and environmentalist who continues to skate and surf. Many female skateboarders today are considered pioneers, but Peggy was a champion when it was truly just a boys’ club.

At 37 years of age, Cara Beth Burnside has been tearing up the pavement and the mountains for years. A dual sport athlete (she skateboards and snowboards), Cara Beth is the only woman to hold a gold medal from both the winter and summer X Games.

Vanessa Torres got into skateboarding only because all of her friends were doing it. The 20-year-old was the top ranked woman Street skater in the world for 2005.

At only 16, Lyn-Z Adams Hawkins was ranked third in the world in both Vert and Street skating in 2005. She’s one to watch, as many are saying she represents the new generation of skaters (and not just because of her phonetically-spelled name).