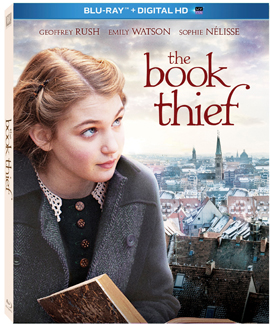 On The New York Times Best Seller list for over 230 weeks, The Book Thief was recently made into an Oscar-nominated film of the same name.

It’s Germany in 1938 and Liesel Meminger (Sophie Nélisse) arrives at the doorstep of foster parents Hans (Geoffrey Rush) and Rosa (Emily Watson) Hubermann. Her mother is a Communist, fleeing danger from the rising conflict of what will eventually become World War II.

Her neighbour, a young boy named Rudy (Nico Liersch) immediately takes to Liesel and makes it his mission to show her the ropes. But the other kids don’t go so easy on her. At a Nazi book burning ceremony, Liesel and Rudy are both bullied into throwing books onto the pile. However, once everyone retreats, Liesel picks up a novel from the ashy ruins and takes it home.

Her foster father, Hans, discovers the stolen book, but let’s her keep it, helping her to read and learn new words by making a chalkboard dictionary all over the walls of their basement.

But one day the basement has another occupant—Liesel soon shares her precious space with Max (Ben Schnetzer), a Jewish young man that the Hubermann’s agree to hide. But how long can they keep him safe? Keep each other safe?

Suspense: Every moment of this movie will have you on the edge, wondering if the family will get through the next hurdle. Then the next. Then the next…

History: If you know anything about world history, this is a personal glimpse into the effects of such a war on the individual lives of the people. If you don’t, well, then Google “World War II” and start watching. This is lesson #1.

Heroine: You can’t help but fall in love with the courage and fire of young Liesel. She starts from nothing, but never loses her spirit, which drives her to make some tough choices.

Extras on the Blu-Ray/DVD include deleted scenes and a short documentary with interviews from the cast, wardrobe, setting and music.

We caught up with Sophie Nélisse, the Canadian actress who plays Liesel, to chat about her experience making such an epic film.

Was acting something you always knew you wanted to do?
Actually, no. I wanted to be a gymnastic, so I was training about 30 hours a week. My goal was to go to the Olympics. I only did acting, since I was 7, just for fun and for a bit of money to pay for gymnastics. When I got The Book Thief, that’s when I really decided I wanted to do this.

Was it difficult to get used to the accent?
I had some classes with two dialect coaches—so, it wasn’t hard once you practised and knew what to do. When I was talking to people, I’d try to practise, so it came fluently.

What was it like to film in Germany?
When I was on set, I was in Germany of the past—because of all the houses and everything, the whole set felt true. Then when I would go out, it was this completely new Berlin. So, when I’m on set, I’m in the old one, and when I come out I’m in the new. Everywhere you go, there are walls telling the stories about what happened. So just by walking through the city, you can learn so much.

What was your favourite scene?
The snowball fight scene. Because we were actually throwing some snowballs. It was really fun. The actor who played Max told me that I would get $3 for every person I hit in the face. So, in total, I got $18. But he never paid me.

What was it like to work with Academy Award Winner Geoffrey Rush?
I thought maybe he’d be a serious guy and really focused. He’s really like a clown, always making jokes. We always had fun together.

What advice would you give to other young actors?
Don’t give up, but also don’t try too hard. You have to go with the flow. If it’s meant to be, I think it will happen. Stay natural and never give up.

THE BOOK THIEF is now available on Blu-ray and DVD. Check it out!


One thought on “The Book Thief: Secrets From On Set With Canada’s Sophie Nélisse”