November is World Vegan Month, and we’re here to shed some light on vegan myths by interviewing our favourite vegans!

Created by TV host and producer Lauren Toyota and owner and operator of The Farmhouse Creative Labs, John Diemer, the Hot For Food blog will make your mouth water and inspire you to try new recipes such as mac and cheese, lasagna, tacos, poutine, and coconut cream pie that are 100% vegan. They are cooking up vegan love and breaking all misconceptions of what veganism is, one dish at a time. Faze caught up with this dynamic duo to chat about their vegan lifestyle, common myths, plus a crowd-pleasing recipe that you must try at home. 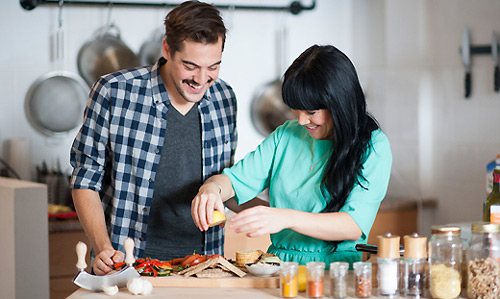 How long have you been vegans, and what influenced you to change your lifestyle?

Lauren: I’ve been vegan since January 1, 2010. I went vegan because for years I struggled with guilt from eating animals, as well as just physical discomfort from eating meat, poultry, fish, and dairy products. I went vegetarian at the age of 12 and ended up going back to being an omnivore in college. Then I struggled with that for a few years, going back and forth from one to the other, until finally I got fed up and realized that going vegan was the only way my body could function at its best. I’ve never looked back!

John: I have been vegan for about a year and a half, and I really became vegan because I met Lauren, and she introduced me to the lifestyle.

Is it true that being a vegan also impacts the clothes you wear and the beauty products you use?

Lauren: It’s my belief that it should affect that, but maybe not right away. Each person goes through their own journey to being more conscious of what they’re consuming, whether it’s food or other consumer goods. I started my vegan journey with making changes to my diet, but after a while, I began to recognize that the way I live affects the whole system of agri-business. It was only in the last year that I started to make a diligent effort to check labels of clothing, cosmetics and household products and stopped purchasing things like leather, wool and any products with animal ingredients or testing on animals (which is still very prevalent, by the way). So, if one believes that it’s ethically wrong to eat an animal, then it only makes sense that you would also recognize that it’s ethically wrong to wear them on your body, too. I’m not going to tell anyone what to do, because one decides to become vegan for a variety of reasons, but once you take that step, it’s only inevitable that you’ll connect the dots.

John: It affects everyone a bit differently and at different times. People don’t usually go vegan overnight. For me, after a year and a half of being vegan, the way I eat has become easy, and just now, I’m becoming more aware of the clothes I wear and products I use.

Would you say that the vegan lifestyle is restrictive?

Lauren: The vegan diet is the furthest thing from restrictive! Everyone likes to focus on the things you’re taking out of your life; however, there is a longer list of foods that you’re adding to your life. There are likely a lot of plant-based foods that an omnivore never really incorporates into their diet—at least, that was the case for me. I now see how limiting the omnivorous diet is because of the way we’ve been engrained to think about food. “Typical” meals start with some kind of meat, add in a grain and leave the vegetables as a mere side. Vegans get to be so much more creative in the kitchen, and I eat all the same fun things an omnivore does, like mac and cheese, burgers, pizza, etc., but I also eat amazing nutritious and colourful meals that have more interesting ingredients than I ever knew existed.

John: I have always had a love for food and cooking, and becoming vegan has allowed me to be more creative than ever in the kitchen and see food in a whole new light. Lauren and I have made an art out of “veganizing” our favourite dishes by replicating textures and flavours with plant-based ingredients. A heavy cream-based sauce is now a light, creamy cashew-based sauce; bacon is replaced with sweet, smokey and salty coconut bacon; and vegetables have a whole new meaning, using them in ways that are so much more than a side dish.

We’re hoping you can clear up a few myths for us:

Lauren: Not the case! Think of how many varieties of fruits, vegetables, legumes, grains, seeds and nuts come from the earth—we eat all of those things. Plus, now more than ever, there are incredible vegan substitutes in the grocery stores for things like bacon, burgers, pizzas, cheese, ice cream, and the list goes on and on. You want to balance those packaged products with lots of real food, of course, but we are far from deprived!

2. Vegan diets are unhealthy because you don’t consume enough protein and calcium for a balanced diet.

John: There is a huge misconception about what protein is. We associate protein with meat, fish and poultry only, and most people aren’t educated enough about food to know that lots of plant-based food contains sufficient amounts of protein as well, especially when you combine those foods together. You can consume your daily requirement of protein and calcium if you eat a healthy vegan diet. It’s certainly possible to be an unhealthy vegan as well, but more likely there are far more unhealthy omnivores: people in general are just consuming too much animal protein and not enough dark, leafy vegetables and a variety of foods to be getting enough nutrients. Because a vegan diet is entirely based around nutrient-rich foods, we easily get what we need in a day from whole plant foods. The only supplement a vegan truly needs to take is vitamin B12, because it’s mainly only found in animal protein.

3. Because of the vegan diet, vegans don’t have enough energy to work out.

Lauren: This is entirely untrue. Just google “vegan athletes,” and you’ll see a ton of great role models for the vegan movement, like MMA fighters, weightlifters, tri-athletes and pro hockey players. In fact, because your body is running on efficient energy from plant-based foods, you will notice an increase in your energy levels, and because you’re not eating a lot of saturated animal fats, you’ll probably notice that you’re no longer so hard on yourself if you miss a work out or two. Eating vegan also affects your state of mind! And, you might just experience a little bit of natural weight loss from consuming more plant-based foods and less dairy and meat.

John: We’ve notice that our Cauliflower Buffalo Wings are the most popular recipe on the blog. I think it’s because it’s easy and so incredible that cauliflower is actually “meaty.” This has become our fave recipe just because of how many non-vegans are impressed by it! 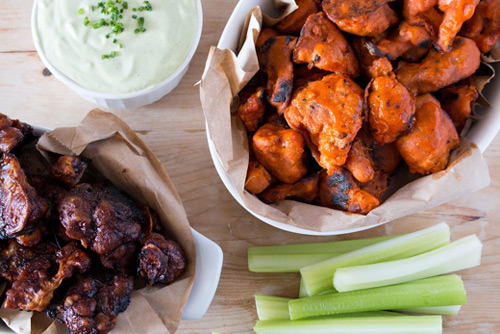 Check out more at the Hot For Food Blog!


One thought on “John Diemer And Lauren Toyota Are Hot For Food!”