Love a challenging sport? Try kitesurfing and hit the waves full speed ahead. 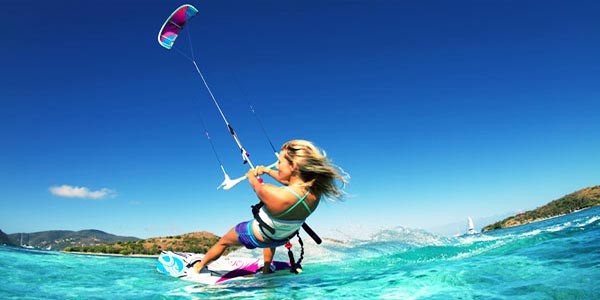 It’s certainly not for everybody, but if you fancy a challenge and you’re not afraid to be at the mercy of wind and wave then kitesurfing could be for you. As the name suggests, kitesurfing involves the use of a kite and a surfboard, in combination with wind and water to perform normally impossible feats of acrobatics while simultaneously trying to avoid having a kitemare (see “Terms” below). The fearless kitesurfer is anchored to a surfboard with foot straps and uses the power of a large controllable kite to propel herself and the board across a body of water, usually the sea.

It’s an extremely skillful and challenging sport because the rider must both pilot the kite (in the air) and steer the board (on the water). Kites have been used in a variety of ways for propulsion since the 1800s (some people credit the Chinese with first using kites for moving people and goods as early as the thirteenth century). Today the applications are mainly sporting with a number of niche activities including: kite-landboarding, snow-kiting, kite-buggying, kite-jumping, and using kites to propel sea kayaks. In the late 1990s, at the surfing mecca of Maui off the Hawaiian coast, Laird Hamilton and Manu Bertin (both surfing legends) demonstrated to surfer radicals the extreme sports opportunities presented by kitesurfing. As a sport, kitesurfing is still in its infancy but it’s growing rapidly in popularity with organizations, competitions, videos, and magazines worldwide dedicated to the pursuit of the perfect thermal/tidal combo. 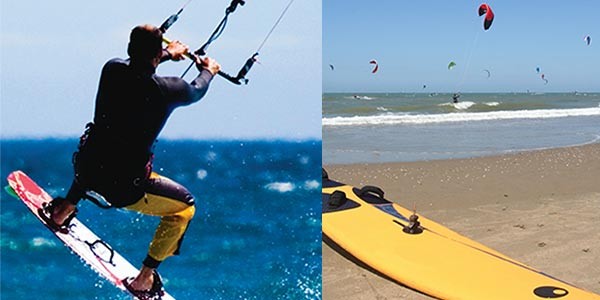 Canada’s enviable natural environment and champion kiters were showcased at the 2006 PKRA Kiteboarding World Cup, which was staged in the Iles de la Madeleine (Magdalen Islands), a small archipelago in the Gulf of St. Lawrence near Prince Edward Island and Nova Scotia. Competitors from 13 countries geared up for the tournament that featured $40,000 US in prize money to be awarded for the two disciplines of freestyle and racing. Canadian talent was well represented, with 24-year-old women’s national champion Daphnee Laliberte (Quebec) and 16-year-old Canadian men’s champion Sam Medysky (Ontario) narrowly missing out in their heats. Also competing were Yannick Sumarah, William Acosta, and Jasmin Bousquet. Sadly, the home team failed to clinch a top spot. But with your help, maybe next time they could!

Where can you do it?

As kitesurfing relies heavily on favourable and consistent wind conditions, specific locations where the environment and climate are best suited tend to be sought out by fanatics. Thankfully, Canada has its share of world class locations, including: the Iles de la Madeleine; Lake Nippissing, near North Bay in Ontario; and Nitinat Lake and Squamish Spit in British Columbia. The Squamish Spit site, which borders between the Squamish river mouth (where it spills into Howe Sound) and the Squamish estuary, is a great place for beginners. Here, the local Squamish Windsports Society provides a rescue boat and has staff on hand to provide information on site fees, safety regulations, and proper kite etiquette.

What do you need to do it?

Kitesurfing rests on the principals of wind power so perhaps the first thing worth considering if you’re thinking about getting into the sport is the kite used to harness that force. Power kites, as they’re known, come in two major forms. The most common type of power kite is the inflatable variety. These are made from ripstop nylon with inflatable bladders to help the kite keep its shape and stay afloat when it inevitably drops into the water. Some inflatables, known as Bow kites because of their shape, offer a greater degree of flexibility than earlier designs in terms of how much power (or thrust) they generate. The second variety is foil kites, made from mostly fabric with air pockets, these are generally impossible to relaunch if they hit the water because once they become soaked they have no way of retaining their buoyancy. Kite sizes vary from 7 to 21 square meters and in general the larger the size the faster you go. Seasoned kiteboarders may have three or more kite sizes to accommodate various different wind levels.

Before rushing off to the nearest beach you’ll also need to lay your hands on a few other essentials. The kiteboard itself is usually small and made of a composite, wood, or foam construction. There are several types including surf-style, wakeboard, hybrid, and skim type boards. Most boards come with sandal-like foot straps which are essential for pulling off those daring acrobatics and impressing your friends. Flying lines are fastened to the kite and control bar, and they’re made from an extremely strong thermoplastic called dyneema which is resistant to corrosion and moisture absorption. A control bar attaches to the kite via the flying lines, and the rider holds onto the bar and controls the kite by pulling on its ends. Kite harnesses come in seat, waist, or vest types and are used for attaching the rider to the control bar. Also, don’t forget your wetsuit, safety knife (for cutting snagged lines), helmet, PFD (personal flotation device), board leash, whistle for signalling if things go wrong, and buddy to help you suit up, launch, and retrieve the kite. 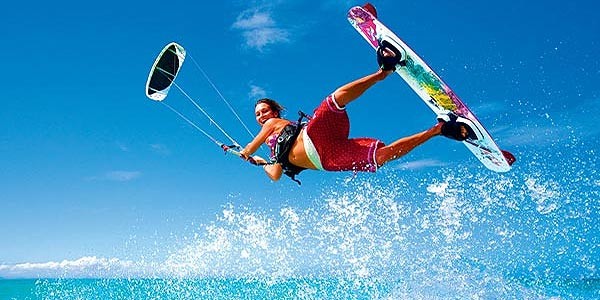 Body dragging: being pulled through the water without standing on your board.

De-power: to reduce the kite’s power (pull) by adjusting the angle to the wind.

Edge: tilting the board with its edge into the water: used to control the direction of travel. Like some other board sports, edging is one of the most fundamental skills of kiteboarding. It’s also crucial for learning to travel upwind. Hindenburg: referring to the Hindenburg Airship disaster of 1937, which in kitesurfing slang means the kite stalling and falling out of the sky.

Lofted: to get lifted directly into the air by the kite.

Tea-bagging: Popping out and falling back into the water intermittently.

Doing tricks is one of the major elements of kitesurfing and a whole lot of fun. Here are some very basic descriptions of some of the more popular tricks that your average kitesurfer might perform.

Board-off
Requires the rider to take one or more feet stylishly off the board. This must be done quickly so that the feet are returned to the board to prepare for landing.

Grab
A trick borrowed from skateboarding. The kiter needs to be able to jump at least three metres to perform a grab. As soon as they are airborne the rider bends her legs and grabs the board with the back of her hand.

Huge jump
A requirement for many beginner/intermediate tricks as you need lots of air time or height to perform the manoeuvres. The kiter generates speed, usually by travelling downwind, then tilts the kite high into the sky and cranks it backward which forces them to lift off high into the air.

Invert
Inverting can be combined with all the other tricks. Must be able to perform a huge jump then tilt the head down and lift legs skyward.

Spin
One of the most popular tricks as long as you’re not afraid of getting dizzy. You can spin once, twice, or three times, depending on jump height and the speed of the spin. Once airborne the rider tilts her head and shoulder in the direction she wants to spin, not forgetting to turn her head back to stop spinning.