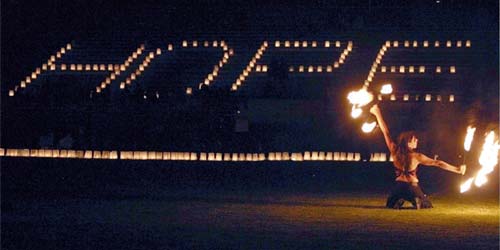 Linda Malloy has been playing with fire for the last three years, and she and her friends have mesmerized audiences at festivals in Toronto and Quebec. Teens tell Linda she’s cool. Mothers warn their children about copying her but are equally fascinated “These people are professionals,” one says of Linda and her fire-spinning colleagues during a recent performance. “They know what they’re doing, but don’t you do it.”

Fire dancing started as an ancient fireless Maori exercise called “poi.” Swinging a ball or stone in rhythm on a rope once made female hands flexible for weaving, and men’s hands strong for battle. Others around the world added fire and more and more spectacular moves. Dancers now wave the flames between their legs, or spin during midair somersaults. In Canada, you can find major groups (along with belly dancers and jugglers) in Toronto, on warm Sundays at the Tamtams on Mt. Royal in Montreal and there’s at least one troupe in Vancouver. 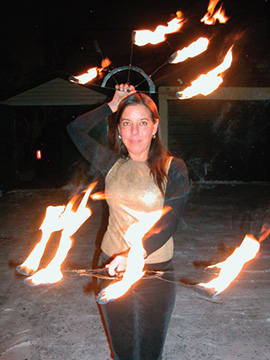 Fire spinning has been Linda’s obsession since she discovered it during a vacation to Guatemala. A year after sending a video of herself and her friend, Lindsay to Toronto’s Circus Orange agency, she met one of its organizers at a party who has since called on her and other fire dancers to perform as needed. She has also worked for Zero Gravity Circus.

That she gets paid well for doing something she loves has been a bonus. She has also gained much self-confidence in exhibiting her skills in front of audiences. However, neither she nor any of her colleagues are ready to give up their day-jobs. Linda is a gardener for the City of Toronto. Others are nurses, computer programmers, engineers and students. 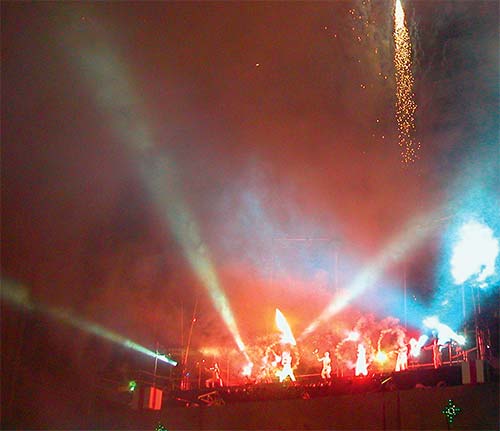 She and some of her friends have been burned, but such accidents are rare. At one of her performances, kerosene accidentally splashed on her cord. Flames advanced up to her hand and she had to drop one of her handles. Fortunately, she suffered nothing more than a couple of blisters.

19-year-old Amethyst Meillon saw poi for the first time at the Om festival in Ontario in 2003 where Linda and some friends were performing. “It was so beautiful. I wanted to learn how to do it.” Linda gave her lessons, a set of practice poi: two tennis balls attached to shoe laces. “At first I was clumsy and hit myself on the head and face a billion times,” says Amethyst. “But I did learn the basic moves: the Butterfly and the Weave.” She kept practicing without fire, figuring out moves by herself when she went back to her native Guatemala for a visit.

One night at a party to celebrate the day Mars came closest to earth, she could wait no longer to light up. She used gasoline, the only fuel available, which is not recommended because it burns too quickly and is toxic. Most dancers use kerosene. “I took it slow. Someone was nearby with a wet towel. I tied my hair back and wore flame-proof clothes.” She spun three times and ended up feeling dizzy from the fumes. But it was exhilarating, with the “swooish” of flames near her ears. “Everything around you disappears. You are very in the moment. You have to concentrate. You have no other thoughts.” 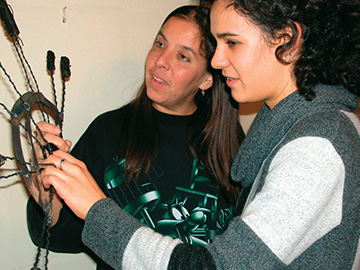